The cover art is based on the interior story "Fool's Paradise." 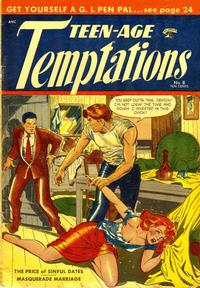 Genre
romance
Characters
Swede Murvy; Sonya; Louis Ravoletti; Mrs. Ravoletti; David Fenton
Synopsis
Sonya’s parents, before they die, arrange to have Swede smuggle their daughter into the USA. Swede intends to use Sonya as bait for a blackmail scheme. He takes compromising photos of Sonya and David. Because she’s fallen in love with David, Sonya steals the photos and turns herself in. David takes Sonya to Canada and marries her. Someday she’ll be able to return to the USA legally as his wife.
Keywords
blackmail; illegal immigrant; refugee; World War II

Genre
romance
Characters
Ann Johnson; Mr. Johnson; Mrs. Johnson; Clark Adams; Tom Hancock; Phyllis Walters
Synopsis
Ann loves Clark although he’s 15 years older than her. When Clark announces his engagement to Phyllis, Ann schemes to break it up by spreading rumors. Clark finds out and Ann apologizes. She knows she has “a lot of growing up to do before I was worthy of a love like” Phyllis and Clark’s.

Genre
romance
Characters
Pat Cooper; Jetta Lenter; Bob; Harry; Mr. Cooper; Mr. Lenter; Mrs. Cooper
Synopsis
16-year-old Pat and Jetta hang out near waterfront taverns and pick up two factory worker boyfriends, Bob and Harry. Pat won’t go all the way with Bob unless he marries her, so he suggests they elope. Both couples get married and spend the night in a motel. Pat: “It wasn’t anything like wedding nights I’ve read about...Bob...was rough...almost brutal!” The girls discover the marriages were fake. They’re picked up by the police. Bob and Harry get 10 months in jail. Pat and Jetta have to live with their reputations: “None of the nice fellows ever ask us for a date now.”
Reprints

"For Our Readers and Servicemen"

The Price of Sinful Dates (Table of Contents: 5)

Genre
romance
Characters
Doris; Gloria; Mike; Ricky Vinton; Mabel; Catfish
Synopsis
Doris takes up with bandleader Ricky, leaving her decent boyfriend Mike behind. When Ricky has to flee due to criminal charges against him, he takes Doris with him across state lines. Doris escapes but is arrested. Her sister Gloria and Mike testify that Doris was an innocent dupe, and the charges are dropped. Mike isn’t happy, but he eventually takes Doris back.
Reprints

On the second page of this story, there is an oblique reference to Ricky and a friend smoking marijuana. His friend says "Give me a couple of drags on that," but Ricky warns him they have "an audience" (Doris).