On-sale date from Comic Reader #150.
This issue has variants:

The Laughing Fish (Table of Contents) 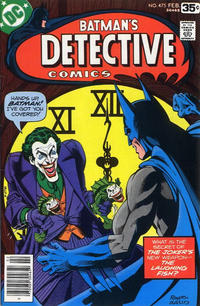 The Laughing Fish! (Table of Contents: 2)

Job Number
S-2773
Genre
superhero
Characters
Batman [Bruce Wayne]; Joker; Silver St. Cloud; Rupert Thorne; Marko; James Gordon; G. Carl Francis
Synopsis
The Joker gives fish everywhere his face, then tries to claim copyright to his image. And he will kill anyone who gets in the way of his plan.
Reprints

Remember How Many Times You Felt Left Out Because You Were Broke! (Table of Contents: 5) (Expand) /

Fastest Growing Sea-Monkeys of All Time! (Table of Contents: 8) (Expand) /

Make Way for the Explosive First Issue of Firestorm (Table of Contents: 13) (Expand) /

The Most Spectacular Super-Hero Battle of All Time! (Table of Contents: 15) (Expand) /

Strong Arms Make All the Difference! (Table of Contents: 17) (Expand) /