Art previously credited to Leo O'Mealia. Changed per Scott Bonagofsky (April 19, 2007) based on his conversations with Creig Flessel. 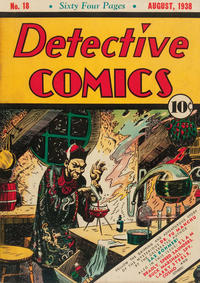 The Hilton Diamond (Table of Contents: 2)

Donald Brent is also called Elias Brent, as if the writer couldn't remember his name from one page to the next.

First Line of Dialogue or Text
Hmm! They're reported to be hiding around this locality!
Genre
humor
Characters
Oscar
Synopsis
Oscar mistakes a group of men in prison stripes for escaped convicts. In fact, they are heading for the Good Fellows Club Masquerade Ball

[Murder in Texas] (Table of Contents: 4)

First Line of Dialogue or Text
Cosmo, feeling the need of a vacation...
Genre
detective-mystery
Characters
Cosmo; Jem Hawkins; Sheriff Harvey
Synopsis
Cosmo takes a vacation out west and gets involved in a case when his friend Sheriff Harvey is accused of murder.

Adaptation of The Insidious Dr. Fu Manchu by Sax Rohmer.

The Golden Key (Table of Contents: 8)

Story in black and white.

Compare the art with the signed Steve Malone story in Adventure Comics #38 (May 1939).

[In the Stratosphere] (Table of Contents: 11)