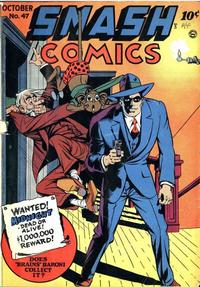 First Line of Dialogue or Text
I think someone doesn't like me!
Genre
adventure; superhero
Characters
Midnight [Dave Clark]; Doc Mortimer Wackey; Gabby (a monkey); Sniffer Snoop; Hot Dog; Brains Baroni (villain); Stilleto (villain); Bruiser (villain)
Synopsis
The underworld puts out a million dollar bounty on Midnight, but no one wants to collect on it until Brains Baroni offers a fool-proof, no risk way to get rid of Midnight.
Reprints
Keywords
The Murder Midnight Club

Title from the cover

Genre
humor; sports
Characters
Daffy; Null and Void (producers); 10 Percent (an agent); a plumber
Synopsis
Daffy suddenly finds herself as a star in a Broadway show with a possible murder on her hands.
Reprints
Keywords
wrestling

Script revision from Tumey to ? by Craig Delich. The Who's Who does not indicate that Tumey wrote this feature and no extant evidence proves that he did. The Who's Who also indicates that Tumey only drew Daffy from 1946-49. Other listed artists include Milt Stein in 1945 and Janice Valleau from 1945-46.

Originally credited "Witmer Williams ?", but does not match his other credited stories in this features. Compared with Leav's signed story in Power Comics #4, everything matches, face of the policeman, large hands, way of running with high lifted knees and some panels without backgrounds. Only the inking is different from his signed story.

First Line of Dialogue or Text
Take that!
Genre
humor; detective-mystery
Characters
Wun Cloo
Synopsis
Wun discovers a big fellow beating up someone because of a poster he sees that he mis-interprets.
Reprints

[Another William Tell] (Table of Contents: 8)

Genre
adventure; war; superhero
Characters
The Marksman [Baron Povalski, aka Major Hurtz]; Vorka; the Nazis (villains); the Japanese [Mito; others un-named] (villains, some die)
Synopsis
Major Hurtz welcomes a delegation of Japanese delegates who have come to Poland to help plan for future attacks on their enemies, and they have the cruelest plan ever to try and smoke out the Marksman.
Reprints

Guardineer is only credited on drawing this feature by Jerry Bails' Who's Who.

The Adventure of Stoneface! (Table of Contents: 11)

This is probably Leav, as it is very similar to his signed stories in Wanted Comics (Orbit-Wanted, 1947 series) #52.