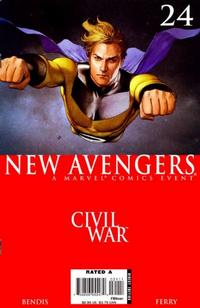 Genre
superhero
Characters
Sentry; Iron Man [Tony Stark]; Inhumans [Black Bolt; Medusa; Gorgon; Karnak; Triton; Crystal; Lockjaw; Fhyty]; CAMEO FLASHBACK: Spider-Man [Peter Parker]; Wonder Man; Ms. Marvel [Carol Danvers]; Daredevil; Vision; Goliath [Bill Foster]; Yellowjacket [Hank Pym]; Wasp; Hulk; Red Ronin
Synopsis
Apprehensive about his role in the Civil War, Sentry flies to the moon for some time to think but is accosted by the Inhumans. He has dinner with Black Bolt and company and explains the current situation on Earth among the heroes. He is asked to spend the night and comes close to reigniting a relationship with Crystal. That is, until Iron Man shows up to bring him back to earth.
Reprints
Keywords
Civil War

Page 6 of the story, drawn by Paul Smith, is a mock up of a cover for the fictitious series Startling Stories Featuring The Sentry #92.

The alleged relationship with Crystal took place after her break-up with the Human Torch in the Fantastic Four.

Statement of Ownership (Table of Contents: 4)