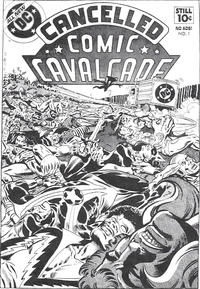 An Editorial, of Sorts (Table of Contents: 1)

Explains why and how these two volumes came about. States that 35 copies were made and distributed to the creators, copyright people, and Bob Overstreet.

The Lure of the Magnetic Menace! (Table of Contents: 2)

Lure of the Magnetic Menace (Table of Contents: 3)

Job Number
J-5476
Genre
superhero
Characters
Ray [Happy Terrill]; Dennis Lyle; Cliff; Dark
Synopsis
As the Ray floats in Gotham Bay, recovering from absorbing the fires from the American Allied Chemical plant, he spies a truck plunging into the water. But all he can think of is the day he became the Ray, when as a reporter he rode Professor Styne's experimental strato-balloon, entered a strange cosmic storm, and gained his light-based powers.

Story intended for unpublished Black Lightning (DC, 1977 series) #12. There is no title or logo on the first page.

The Death Disciples (Table of Contents: 5)

Cover intended for unpublished Black Lightning (DC, 1977 series) #13. Includes no trade elements. Pencil credit confirmed with artist, April 2008, who states this is a xerox of his very tight pencils.

The Travelers of Dark Destiny (Table of Contents: 6)

Job Number
J-5327
Genre
sword and sorcery
Characters
Claw; Thovan; Trysannda; Chim; Prince Ghilkyn; Dalivar
Synopsis
Having lost the gauntlet that shields him from the demonic influence of his right hand, Claw has cut off that hand, when he meets Trysannda. She has sought Claw out to help her get out of a bargain she has made with a wizard. Reluctant to help her, Claw finds his severed hand has returned and that he must recover his gauntlet from Dalivar, the very wizard with whom Trysannda made her bargain. So the pair of adventurers head to the wizard's castle at Ravenroost.

When the River of Ravenroost...Ran Red (Table of Contents: 9)

Genre
sword and sorcery
Characters
Claw; Trysannda; Validarr; Prince Ghilkyn; Sha-Gasa
Synopsis
While Claw fights the Earth elemental guarding Ravenroost, Trysannda is taken to the master of the castle, Validarr. Once Claw defeats the elemental, however, he proves no match for the rodent guardians of the castle, and is thrown in the dungeon. He escapes his prison in time to save Trysannda, and after Claw defeats the monster Sha-Gasa, the two head underground where they encounter yet another challenge.

Cover originally scheduled for Showcase (DC, 1977 series) #107, this cover was then intended for the unpublished The Deserter #1. Includes no trade elements.

The Deserter (Table of Contents: 11)

Job Number
J-5423
Genre
western-frontier
Characters
Aaron Hope; Marcy-Anne; unnamed sheriff of Cooper's Canyon; McKensie; Jase Carson; Willie Dredge; Krug; Ronson; Jacobs; Will Olsen
Synopsis
Aaron Hope rides into Cooper's Canyon and makes an impression on the sheriff and his daughter Marcy-Anne due to his refusal to use a gun. The sheriff tells Aaron how Jase Carson is buying up land at Dry Water and chasing off those who refuse to sell. After Aaron heads to Dry Water, Willie Dredge who is looking to turn in Aaron as a army deserter, arrives. Meanwhile, Aaron tells the residents of Dry Water that the railroad will come through their town and they rally against Carson. As a last gambit, Carson snatches Marcy-Anne and tries to flee, but Aaron saves her and puts Carson down.

Story originally scheduled for Showcase (DC, 1977 series) #107, this story was then intended for the unpublished The Deserter #1. Romeo Tanghal's name appears below the actual credit box, with no inker included among the credits. Presumably part one of a three part story, as the feature was scheduled to run in three issues of Showcase and this story ends with a next issue blurb about Part Two.

Tapestry of Dreams (Table of Contents: 12)

Tapestry of Dreams (Table of Contents: 13)

Job Number
J-5371
Genre
horror-suspense
Characters
Madame Xanadu; Mr. Hazel [Azazel]; Stephen Prince; Laurel; Mr. Jaffe
Synopsis
After Madame Xanadu dismisses a mysterious visitor, she greets Stephen Prince, whose romance with Laurel has been complicated by the arrival of their new neighbor, Mr. Hazel. Madame Xanadu explains that Mr. Hazel is an incubus who creates tapestries from his victims' dreams. If these tapestries are destroyed, the incubus loses his power, but his victims also die. Stephen enters Laurel's dreams in order to defeat Mr. Hazel and release his victims.
Reprints

The Typhoon Is a Storm of the Soul! (Table of Contents: 15)

Story intended for the unpublished Firestorm (DC, 1978 series) #6. First page missing logo and indicia. This is not the story that appears in Flash #294-296 and the plot of this story bears no resemblance to the later story. Though Typhoon has the same powers and looks the same, the secret identities and origins are different. Includes next issue blurb for story titled: The Reptile Man!

The High Price of Food (Table of Contents: 16)

Though the editorial indicates this story was meant for The Green Team #2, there never was a The Green Team #1. (Presumably the story originally intended as The Green Team #1 appeared in 1st Issue Special (DC, 1975 series) #2.) Story stamped "WRITTEN OFF 11-30-77." The last two pages are a preview of the next story, though they seemingly meet the Paper Hanger again for the first time in that story as well. The Paper Hanger is apparently meant to evoke Adolf Hitler, though nothing is particularly made of that connection.

The Deadly Paper-Hanger (Table of Contents: 17)

Though the editorial indicates this story was meant for The Green Team #3, there never was a The Green Team #1 or 2. Pages stamped "N.P.P. INVTY 11-30-74." Again, the Paper Hanger is meant to evoke Adolf Hitler, and he says things like, "I tried to redecorate the world...but...things went wrong."