On-sale date from Comic Reader #155.
This issue has variants:

Clayface Is Back! (Table of Contents) 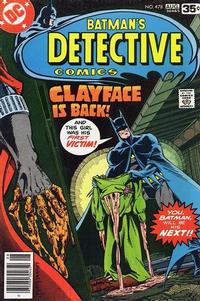 Job Number
S-2849
Genre
superhero
Characters
Clayface [Preston Payne] (origin); Batman [Bruce Wayne]; Alfred Pennyworth; James Gordon; Silver St. Cloud (flashback); Henry Matlock; Matt Hagen (does not appear as second Clayface)
Synopsis
Preston Payne uses blood from Matt Hagen, the second Clayface, to try to change the effects of hyperpituitarism on his appearance. But the "cure" causes Payne's flesh to melt like wax and forces him to periodically dissolve others into protoplasm. When Batman interferes with Payne's theft of the components necessary to reverse his condition, he may become Clayface's next victim.
Reprints
Keywords
S.T.A.R. Labs

First full appearance of this version of Clayface, previous issue had cameo.