Secret of the Waiting Graves (Table of Contents) 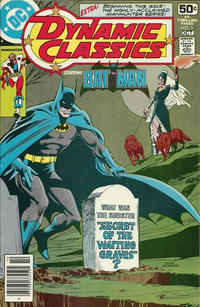 The Secret of the Waiting Graves (Table of Contents: 1)

Job Number
J-5470
First Line of Dialogue or Text
A bleak hillside in Central Mexico... a pair of open graves and the shadow of the dread...
Feature Logo

First Line of Dialogue or Text
Like the heroes of the DC universe, Cary Burkett leads a double life.
Genre
biography

Job Number
J-5430
First Line of Dialogue or Text
Nepal! In the shadow of the Himalayas lies its capital, Katmandu.
Feature Logo

Reprint of the 1st appearance of this Manhunter. Editor from original story.

Job Number
L-114
First Line of Dialogue or Text
In theory, the text page is meant to be read after the comics features of a magazine, saved either as a sort of buffer for reentry into the real world, or to spark the reader into letting the editor and his fellow fans know what he thinks of the comic...

Since there are no letters yet, this article explains the concepts of this series, Demand Classics, Battle Classics, and Western Classics.

First Line of Dialogue or Text
Q: Has Wonder Woman ever teamed up with Batgirl?