Lair of the Ice-Worm (Table of Contents) 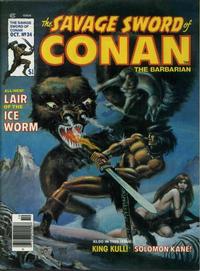 First Line of Dialogue or Text
After his early adventures as a thief in Zamora and Corinthia...
Reprints

The Lair of the Ice Worm (Table of Contents: 4)

First Line of Dialogue or Text
All day, the lone rider has breasted the slopes of the Eiglophian Mountains...
Genre
sword and sorcery
Characters
Conan; Ilga (death); Atali (flashback); primitives; Ice Worm
Synopsis
Conan crosses snowy mountains on his way to more southern countries. He rescues the girl Ilga from a tribe of primitives, but she is later killed by the legendary Ice Worm. Conan strikes back and kills the Ice Worm with burning coals.
Reprints
Keywords
Eiglophian Mountains; River of Death; Snow Devil Glacier

Adapted from the short story "The Lair of the Ice Worm" by L. Sprague de Camp and Lin Carter.

The Legend of Solomon Kane (Table of Contents: 5)

First Line of Dialogue or Text
Solomon Kane is a danger-seeking Puritan adventurer in the England of Queen Elizabeth I.
Genre
sword and sorcery
Characters
Solomon Kane
Reprints

Adapted from the short story "The Moon of Skulls" by Robert E. Howard.
Continued in The Savage Sword of Conan (Marvel, 1974 series) #37.

Conan of Des Moines or, Son of Conan the Syndicated (Table of Contents: 7)

First Line of Dialogue or Text
It's ready at last--and we couldn't be more thrilled about it!
Genre
sword and sorcery
Characters
Conan
Reprints

Preview of the new daily and Sunday newspaper comic strip.

First Line of Dialogue or Text
There comes, even to kings, the time of great weariness...
Genre
sword and sorcery
Characters
Kull; Tuzun Thune (villain; death); Brule
Synopsis
The restless King Kull is drawn to Tuzun Thune's house of a thousand mirrors, where he almost loses himself in his own reflection before Brule comes to his rescue.
Reprints

Adapted from the short story "The Mirrors of Tuzun Thune" by Robert E. Howard.
The 8th and 9th pages of this story are switched/printed out of order. This would later be corrected in the reprinting in Conan Saga (Marvel 1987 series) #24. (From a report to the GCD errors list by Jeff Clem on 2010-12-03.)