First Line of Dialogue or Text
I, the Black Hood, do solemnly swear [...] 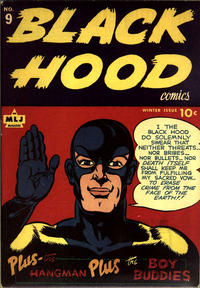 Archie Is an MLJ Feature (Table of Contents: 2) (Expand) /

The Case of the Medical Murderer (Table of Contents: 3)

The Crime-Confessors (Table of Contents: 5)

Is Germany's Secret Weapon a Rocket Plane? (Table of Contents: 6)

not too far off--it was the V-2, a rocket bomb
The drawing here is of a P-39 Airacobra

The Little Crime That Wasn't There! (Table of Contents: 7)

Originally credited Gil Kane (Pen), but the pen name PEN is credited to Pen Shumaker by Jerry Bails' Who's Who.

[The Crooner and the Crooks] (Table of Contents: 9)