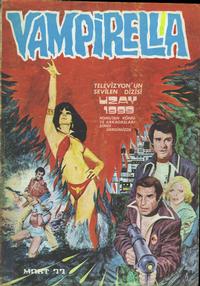 Genre
science fiction
Characters
Kumandan König [Commander John Koenig]; Dr. Helena Russel [Dr. Helena Russell]; Maya; Fraser; Mentor; Alan Carter
Synopsis
"An Eagle is sent onto the surface of the planet Psychon, which has titanium, needed for repairs to the Alpha Base. It fails to return and is used by Psychon scientist Mentor as a bait with which to entice other members of the Alphan crew onto the planet. Mentor is building a computer but it will be fuelled by the living brains of humans, and he has his eye on those of the Alphan crew. Fortunately his daughter, the shape-shifting Maya, does not share her father's views and is on the side of the Alphans." -- IMDB (last viewed 2012-08-22)
Reprints

adapting the origin of Maya from the 2nd season 1st episode of "Space: 1999"