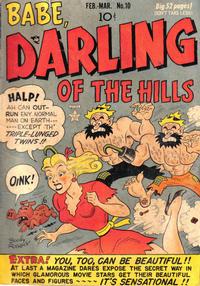 Babe and Pauncho De Leon's Fountain of Youth and Beauty! (Table of Contents: 3)

The Big Bargain (Table of Contents: 4)

First Line of Dialogue or Text
You mean this will actually work?
Genre
humor
Characters
Goofy Gus Who; Mrs. Who;

Statement for October 1, 1949, submitted by Maurice Rosenfield, Business Manager, on September 19, 1949 to Jean E. Schneider, Notary Public. Nevin Fiddler is listed as Editor; Michael M. Bleier and Paul Epstein are listed as owners of Feature Publications, Inc. Frequency of publication is noted as bi-monthly, although indicia does not state frequency.

Babe and the Magic Lamp! (Table of Contents: 7)

Several of Boody Rogers' characters appear in a crowd scene.