These early issues of BOTW are a smaller 7 inches by 7 inches in size. Rather than reduce the original page size to fit, the pages have been rearranged, using less panels per page, leaving the art large and the page count longer. I only mention this to explain why the page counts here might not match their original appearances. 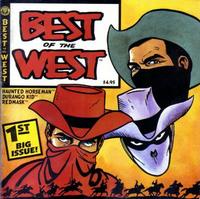 A brief introduction with photos of Charles Starrett as the Durango Kid and Tim Holt.

The Son of the Sheriff (Table of Contents: 2)

The Green Men from Horro (Table of Contents: 3)

The Three Deaths of Redmask (Table of Contents: 4)

To Touch is To Die (Table of Contents: 6)

[Photo of Charles Starrett as The Durango Kid] (Table of Contents: 7)

Mystery Riders of the Great Southwest (Table of Contents: 8)

The back cover, the three characters, in full color.