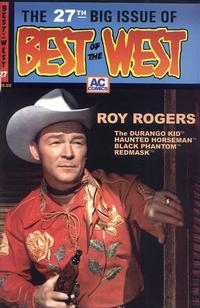 [Roy Rogers leaning on a fence] (Table of Contents: 1)

The Death Rattle (Table of Contents: 3)

The Vanishing Hats of Hollering Gap (Table of Contents: 4)

The Dangerous Dude (Table of Contents: 5)

Reworked from "Annie Oakley and the Lady Killer" from Cowboy Western #64. Annie Oakley has a mask added and her clothing is reworked into a version of the Black Phantom's costume. The rest of the art is the same. All the dialogue and captions are re-lettered and rewritten, though the plot remains the same.

Best of the West! (Table of Contents: 6)

Comments on the stories in the issue. Cover to Western Movie Hero #3 is depicted.

A Trap For Nemesis (Table of Contents: 7)

All references to Ghost Rider in the original are changed to Haunted Horseman or the Haunter in this version.

The Best in Western Thrills from AC Comics (Table of Contents: 8) (Expand) /