The on-sale date is the publication date reported in the U. S. Copyright Office filing. Real Adventures is the reported publisher. 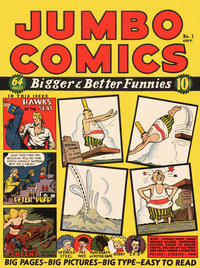 First Line of Dialogue or Text
Hello Kids! Greetings from Jumbo Jim (Jumbo says "Hi-ya")
Synopsis
A welcome from the editor and solicitation for reader submissions, along with indicia.

First Line of Dialogue or Text
Hello, folks--before we start out on this...
Genre
anthropomorphic-funny animals
Characters
Peter Pupp; Tinymite; Watt A. Dogg
Synopsis
Introduction of Peter's sidekick, Tinymite. Peter and Tinymite are kidnapped in their sleep by The Rat, and delivered to evil scientist Watt A. Dogg, who intends to ship them to the moon to see if it is made of creme cheese. Peter attempts to seize control of the ship, and veers off-course, landing on a strange planet. Peter and Tinymite meet the sole inhabitant (who's identity is revealed next issue as The Weatherman).
Reprints

The Weatherman appears to be a potential inspiration for R. Crumb's character, Mr. Natural

First Line of Dialogue or Text
Merrystone's soldiers are scheming to seize the Hawk...
Genre
historical
Characters
The Hawk, Fluth; Sagua; Merrystone
Synopsis
The Hawk learns of a plan by slaver Captain Merrystone to attack Hawk's ship at dawn in retaliation for Hawk's interference in his slave trade. Hawk, in disguise, eludes Merrystone's men, and returns to his ship to warn his men. Before the attack, Hawk's men board another of Merrystone's ships, and convinces them to free their slaves and join him. When dawn arrives, Merrystone finds Hawk under sail, and immune to his attack. Hawk waits to find his opportunity to follow through on his promise of returning the slaves to their home.
Reprints

Reprints pages 41-45 of the Eisner-Iger syndicated "Hawks of the Seas" Sunday strip - full size, without color. Earlier pages were reprinted in Quality's Feature Funnies 3 through 12.

First Line of Dialogue or Text
Can you paint Paddy in the bright and...
Genre
children
Synopsis
fun activity page, including coloring-book item, complete a nursery rhyme, connect the dots, word puzzle, and "find the objects". There is a second one-page Puzzle Phun feature in sequence 16.
Reprints

First Line of Dialogue or Text
On February 24, 1815, the stout ship Pharoah...
Genre
adventure
Characters
Edmond Dantes; M. Danglars; Fernand Mondego; the fair Mercedes; Mr. Morrell
Synopsis
The ship "Pharoah" returns to Marsaille as Napoleon Bonaparte threatens upheaval in France. The ship owner Morrelle learns Edmond Dantes has assumed command during the voyage upon the death of Capt. Leclare, which has rankled Dante's rival, Danglars. Dantes possesses a letter, given to him by Leclare, with instructions to deliver it when the password "Elba" is given. Dantes delivers it, but is witnessed by Danglars. Dantes then visits his fiancee, and learns that of a jealous rival for her affection, Fernand Mondego, who would kill his rival. Danglars schemes with Mondego to make it so.
Reprints

Genre
detective-mystery
Characters
Spencer Steel; Doakes; Lucky Lucifer; Judge Grayson
Synopsis
Spencer, recuperating from a gunshot wound, intends to rest and go on vacation, until his friend and reporter, Doakes, informs him of the trial of "Lucky" Lucifer for murder. Spencer attends the trial, where Lucifer is found guilty and sentenced to hang. Lucifer vows vengeance on Judge Grayson, and sets in motion a plan. His gang kidnaps Lucifer's brother, a scientist with the knowledge to bring back the dead to life.
Reprints

Audrey (Toni) Blum was married to Bill Bossert and it is possible that he did the art as "Lorna Lane".

First Line of Dialogue or Text
If you split, I'll give you the combination.
Genre
humor
Reprints

First Line of Dialogue or Text
In search of the mysterious Sheena, Bob Reynolds...
Genre
jungle
Characters
Sheena [Sheena Rivington]; Bob Reynolds (appears in all Sheena stories); Professor Van Dyke
Synopsis
Bob Reynolds and Prof. Van Dyke search for the elusive Sheena, but are captured by her guards. They escape, but, instead of fleeing, approach Sheena in her throne room, and Van Dyke speaks to Sheena in her tongue, stating that they are friendly. Sheena's medicine man regales them with the story of how Sheena came to be Queen of the Jungle. The story begins with an invading force of Moguls. The wildness of the land and the resistance of the native people whittled their numbers down, until the small remaining group of them settled, and lived with the natives. (continued)
Reprints

Script is reportedly by Eisner.

Build the Flash (Table of Contents: 14)

Lost in the Arctic (Table of Contents: 17)

First Line of Dialogue or Text
Paris 1482. The narrow street of the ancient...
Genre
adventure; drama
Characters
Quasimodo; Jehan; Esmeralda; Phoebus; Claude Frollo
Synopsis
Quasimodo, a deformed unfortunate, spends his days confined to Notre Dame, acting as bell-ringer. He is lured by a festival to the Town square, espies Esmeralda, and falls in love. Evil Jehan, who lusts for Esmeralda, lures Quasimodo to kidnap her. Quasimodo is captured, and put into the pillory. Only Esmeralda show mercy on him. Esmeralda has a romantic rendezvous with her rescuer, but the jealous Jehan murders him. Esmeralda is framed for the murder, and sentenced to hang, only to be saved at the last minute by Quasimodo.
Reprints

From the classic novel by Victor Hugo.

Credit reads "Pictured by Dick Briefer" which does not necessarily suggest that he is also the writer.

Island of Gold (Table of Contents: 22)

First Line of Dialogue or Text
Inspector Day (sic) has come upon a smuggling ring...
Genre
detective-mystery
Characters
Inspector Dayton; Joe the Fink; "Ace of Spades"
Synopsis
Inspector Dayton has finally crossed paths with the smuggling ring he has been hunting, only to be captured. He escapes, and makes it to the police station, with a plan to capture the ring, known as "The Ace of Spades". The gang manages to elude Dayton's trap, but not without leaving clues to their whereabouts.
Reprints

Art previously credited to "Jack Kirby ?".
Page four indicates that it is Strip #50, suggesting that this is sequence #47 to #50.

First Line of Dialogue or Text
The sherrif (sic) and his men are trapped in...
Genre
western-frontier
Characters
Wilton; Bart Lugar; Luke Reed; Billy Danson; Major Murdock
Synopsis
Bart Luger and his band of cutthroats have the Sheriff and his posse surrounded, but Wilton and little Billy flank them. When Billy is in danger of being shot, Wilton has no choice but to engage Bart, and a fight ensues. Wilton knocks out Bart, and attempts to take him captive, but Bart's gang puts a bullet in his back. Billy rides for help, and finds a group of rangers, who bear down on the gang. (continued)
Reprints

Seven unrelated gags by different artists, the fourth of which is signed by Bob Kane.

Out of proper sequence.