1st of 4 newspaper strip collections in this series.

The Living Daylights (Table of Contents) 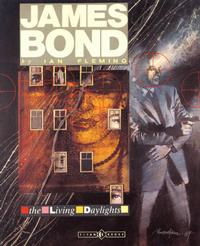 Brief description of how Ian Fleming was convinced to let The Daily Express adapt his 007 novels into newspaper strips, and a further intro of the 2nd era of the strip, including short bios of writer Jim Lawrence & artist Yaroslav Horak.

The Man with the Golden Gun (Table of Contents: 2)

The Man with the Golden Gun (Table of Contents: 3)

Story #14. Faithful adaptation of Ian Fleming's 12th (and last) 007 novel (13th book) from 1965. In the tradition of THE SAINT tv series with Roger Moore, this adaptation adds substantial material to the original novel while remaining faithful to it, improving the story in the process. Apart from the characters of Scaramanga and Mary Goodnight, the subsequent 1974 film bears virtually no resemblance to the novel or comic. Strips 1-209 (series 3).

The Living Daylights (Table of Contents: 4)

The Living Daylights (Table of Contents: 5)

Story #15. Faithful adaptation of Ian Fleming's short story which originally appeared in THE SUNDAY TIMES, which inadvertently offended the publisher of THE DAILY EXPRESS, leading to the comic-strip's cancellation for a year. The 2004 edition noted the continuity of having this story appear at this point is somewhat "off", as Bond appears bored with his job (as he would have been following THUNDERBALL) rather than having a renewed desire for vengeance against the KGB (as he would be following THE MAN WITH THE GOLDEN GUN). Presumably it was the problems connected with the short story that caused the delay in its being adapted into the comic-strip. Jim Lawrence changed only the ending of his adaptation. The story later appeared, somewhat faithfully, as the opening sequence (and springboard) of the 1987 film. Strips 210-263 (series 3).

James Bond Will Return in (Table of Contents: 6) (Expand) /