The Gunslinger Born (Table of Contents)

Genre
western-frontier
Synopsis
The Dark Tower is Stephen King's self-proclaimed magnum opus which he began in 1970 and completed the seventh volume of in 2004. Marvel Comics has had the rare opportunity to combine forces with Stephen King and present tales of the Gunslinger from his formative days.

Wraparound cover with bar code on the back cover. 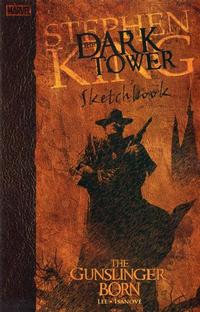 Centerspread of comic showcasing full poses of these characters. Identification names are typeset.

The Painted Process (Table of Contents: 4)

Synopsis
Isanove provides an inside look at the digital painting process to bring these images to life in full color.