Although bi-monthly is indicated in indicia, next issue blurb on last page says "on sale in just 30 days."
This issue has variants: 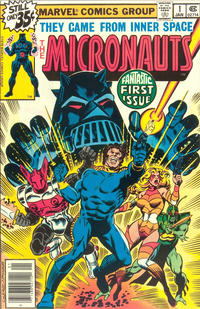 Meet: The Micronauts (Table of Contents: 2)

Profiles of the Micronauts characters. This sequence added 2005 by Steven Tice.

The unused cover to Micronauts # 1.