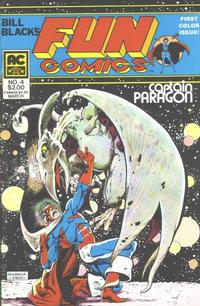 Synopsis
Letter of comment from Howard W. Sangroom, plus introductory text on AC line of comics.

'What is AC Comics?' section mentions Soldier of Fortune and the Lady in White, two AC characters that never made an appearance in an AC Comic.

Everything You Wanted To Know About... Captain Paragon... But Didn't Know Who To Ask!! (Table of Contents: 2)

The Mystic Origin Of... Nightfall (Table of Contents: 4)

First Line of Dialogue or Text
This is it, Phantom Lady!
Genre
superhero
Characters
Nightfall; Phantom Lady
Synopsis
Phantom Lady is given the Cloak of Darkness and becomes Nightfall.

Character would later be renamed Nightveil. Cloak of Darkness and gloves are colored red in this story only.

Samson and Delilah At Boys' Ranch (Table of Contents: 5)