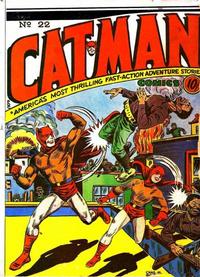 Hands of Destiny (Table of Contents: 1)

The Catman and the Kitten / comic story / 9 pages (report information)

The Demons of Death (Table of Contents: 2)

Genre
adventure
Characters
The Deacon [Dean Denton]; Mickey Matthews; Caldron (banker, cameo, death); "Mad Monk" Rasputin Jr. (hypnotist, cameo); Satan [Pierre LaMarte] (villain, banker); Satan's followers (villains, members of the bank's Board of Directors)
Synopsis
Hearing a weird cry, the Deacon and Mickey exit their home and go out into the marshland, discovering a fatally wounded man who warns them of the "demons of death". Spotting several figures looking like devils, they soon spot those figures robbing a bank of their gold. Deacon puts a false ad in the personal column to draw them out into the open so they can be dealt with, and soon discovers the band of villains are members of the Centreville Bank's Board of Directors, wanting to embezzle the bank's funds.
Reprints
Keywords
Centreville Bank

Last panel shows Mad Monk Rasputin Jr., who plays a large role in the next issue.

Although Al Zere mostly did humour features, he did some "straight" work including "Minit Mystery" and "One Round Hogan," and this story very strongly resembles his work.

The Cry of the Killer-Beasts (Table of Contents: 4)

Major Williams is in Hollywood, going around with 'Betty Lou'; at the end is an apology to 'Miss Ray Hermann', Craig's fiancée (also known as Rae Herman)

Venture into Rebellion (Table of Contents: 8)