Pencils and inks were originally credited to Leo O'Mealia. Creig Flessel confirmed to Scott Bonagofsky in 2007 that it was one of his covers. Correction was submitted by Scott Bonagofsky on July 20, 2008. 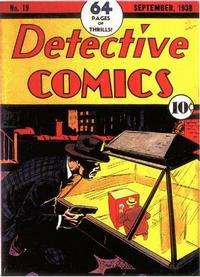 The Grogan Case (Table of Contents: 2)

[The Invisibility Formula] (Table of Contents: 5)

Synopsis and some other information by Art Lortie.

Story printed in black and white.

First Line of Dialogue or Text
Tired of chasing international perils...
Genre
adventure; spy
Characters
Bart Regan; Sally Norris; Rosa Rinaldo (villain, saboteur, introduction, death)
Synopsis
Rosa, a female saboteur who has committed many acts of sabotage, interrupts the wedding of spies Bart and Sally, and uses a mirror that fires destructive rays. Unfortunately for Rosa, that leads to a spectacular, unfortunate end for her.

A Dead Case (Table of Contents: 9)

Story printed in black and white.