It Happened at Midnight! (Table of Contents)

The cover is from an unaltered stat per Nick Caputo, August 2014. Ger Apeldoorn says: "There has been a lot of discussion about this cover.The British version differs from the American one. When this occurs on other issues, it usually means the British version used the original stats before the American version was redrawn. In that case the original version may be by Bill Everett and the redrawing by Carl Burgos (unless Martin Goodman thought it was too dark and needed 'Burgonizing'). But redrawing usually only occurred because of Comics Code demands and there is nothing in the original that would suggest a reason for redrawing - in which case the theory is that some British artist redrew the cover when the stat was missing (although the stats for the interior were all available). (July 2019) 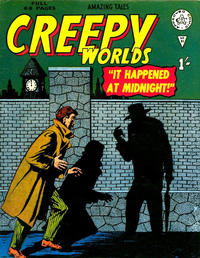 It Happened at Midnight! (Table of Contents: 1)

Job Number
H-739
Genre
science fiction
Synopsis
A writer thinks up a story about aliens from another dimension who pull a man off the street at midnight. Then the same thing happens to him, but the men identity themselves as FBI men looking for an undesirable alien.
Reprints

The Man Behind the Mask! (Table of Contents: 2)

Job Number
H-814
Synopsis
A wealthy miller conducts acts of charity behind a wooden mask, but when events turn for the worse and he has nothing left to contribute, he makes one last trip. As he waits alone with no food, he is surprised to receive gifts from the people he has helped. They tell him that they saw it was him on his last visit, but he says he was wearing the mask. When he takes it out and looks at it, he is astonished to see that it now resembles his face.
Reprints

The Thing in the Box! (Table of Contents: 3)

Job Number
H-671
Genre
fantasy-supernatural
Synopsis
People find a small box with a mirror inside that shows them their true faces.
Reprints

There's No Tomorrow (Table of Contents: 4)

Job Number
H-873
Synopsis
A pirate captures a gypsy scow and a gypsy foretells that the captain's experience tomorrow will be to be stuck in a gale and arrested by the Spanish army. A day goes by uneventfully, but the next day, the prophecy comes true and the captain resolves to hunt down the gypsy for working her magic on Thursday instead of Wednesday as she said. His Spanish jailers inform him that it is Wednesday, as the gale has pushed his ship across the international date line.
Reprints

When Ends the Dream! (Table of Contents: 5)

The Mysterious Stranger (Table of Contents: 6)

We Interrupt This Program! (Table of Contents: 7)

The Secret of the Saucers (Table of Contents: 8)

The Man Who Found Himself! (Table of Contents: 9)

The Magic Shoes (Table of Contents: 10)

For Whom the Sun Shines (Table of Contents: 11)

Job Number
G-797
Synopsis
An experimental psychologist conducting tests on hamsters has a dream wherein they become so intelligent that they escape their cages and turn the tables on him subjecting him to electric shocks whenever he attempts to leave the house. When he awakes from the dream, he terminates his intelligence enhancing experiment and gives the hamsters away as pets.
Reprints

The Man Who Watched (Table of Contents: 13)