The Fury of the War God (Table of Contents) 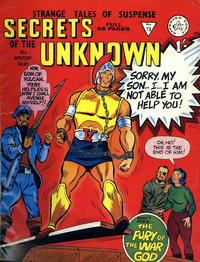 Fury of the War God (Table of Contents: 1)

Job Number
A-4990
Genre
superhero
Characters
Son of Vulcan [Johnny Mann]; Mars; Jupiter; Vulcan; Captain Tusk; Sally Tusk
Synopsis
Mars, stripped of some of his powers by an angry Jupiter, tries to take revenge of Son of Vulcan by disguising himself as captain Tusk.
Reprints

The Eager Rookie (Table of Contents: 3)

The Big Wheel of Bleeker Street (Table of Contents: 4)

Magic in the Circus (Table of Contents: 5)

Job Number
M-139
Genre
fantasy-supernatural
Synopsis
A man who invents fake tales for profit runs into a real adventure that he can't tell because everyone thinks of him as a phony.
Reprints

Art credits and job number from Tom Lammers and Ger Apeldoorn via the Atlas/Timely discussion group.

The Curiosity of Mr. Catt! (Table of Contents: 7)

Job Number
M-137
Genre
fantasy-supernatural
Synopsis
A man rents the apartment of a murderer and begins to adopt his mannerisms.
Reprints

The Secret of the Strange Stone (Table of Contents: 10)

Job Number
L-30
Synopsis
A man finds a meteorite that gives off rays that make things disappear. After having a dream where he is tempted by power, he uses a mirror to reflect the stone's rays upon itself so it vanishes.
Reprints

Those Who Vanish! (Table of Contents: 11)

Information on this sequence from Tom Lammers and Ger Apeldoorn via the Atlas-Timely discussion group.

The Invisible Woman (Table of Contents: 12)