Issue is undated. Estimated date based on analysis of brands and cover prices in the series. Issue indexed from GCD Error Report 12249 from Ger Apeldoorn.

I Created the Colossus (Table of Contents) 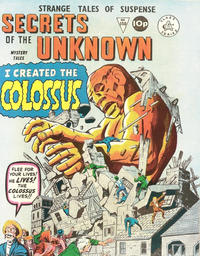 Chapter One: I Created the Colossus! (Table of Contents: 1)

Job Number
V-57
First Line of Dialogue or Text
This mind-staggering tale is a work of pure fiction!
Genre
science fiction
Characters
Colossus [later "It, the Living Colossus"] (introduction, origin); Ivan Petrovski; Boris Petrovski
Synopsis
A Russian dissident is forced by his loyal brother to build a giant statue glorifying the USSR. An alien crash lands and fuses with the statue for protection, animating it and defeating the whole military. The alien’s companions retrieve it and the sculptor claims that the statue was a judgement against dictatorship, frightening the regime.
Reprints

Chapter Three: The Power of the Colossus! (Table of Contents: 3)

Job Number
V-45
First Line of Dialogue or Text
All is silent!
Genre
fantasy-supernatural
Characters
Gorak
Synopsis
A famous magician is enraged when his power is questioned, and he reveals that the whole world is an illusion, and only he is real. He even confronts the reader, but fades away as the story ends.
Reprints

The last panel shows the last two pages of the story in miniature.

The Luna Lizards Had Me Trapped! (Table of Contents: 5)

Job Number
T-387
Genre
science fiction
Synopsis
Human colonists on an alien world believe that they are being attacked by aliens, who, in fact, are trying to help them.
Reprints

The Tree (Table of Contents: 6)

I Fought the Man Who Couldn't Be Killed! (Table of Contents: 7)

Job Number
T-373
Genre
science fiction
Characters
Duke Jordan
Synopsis
A criminal escapes from prison after 10 years and robs a warehouse. He is found by a police officer with superhuman powers, and is surprised to learn that the police now only recruit robots.
Reprints

Set in 1969. Possible Wessler script per Nick Caputo from information in Robin Snyder's The Comics, Vol 26, No. 4, April 2015. A Wessler inventory story was originally titled "The Man That Couldn't Die" Pencil credit and ink credit from Dr. Michael J. Vassallo via the Atlas/Timely discussion group.

The Needle Swings! (Table of Contents: 8)

I Hear It Howl in the Swamp! (Table of Contents: 9)

Job Number
T-3??
First Line of Dialogue or Text
The unknown swamp holds many secrets...
Genre
science fiction
Characters
Charley
Synopsis
A fishing guide encounters an alien monster in the swamp, and after initial disbelief, the military plans to kill it. When two larger aliens arrive to take the thing away, they realize that it was only a lost child.
Reprints

The Empty City (Table of Contents: 10)

Job Number
9523
Synopsis
A reporter stumbles upon aliens who are taking the place of humans. He tries to give the story to his editor, but his editor is one of...them.
Reprints