Issue is undated. Estimated date based on analysis of brands and cover prices in the series.

The Sandman Cometh! (Table of Contents) 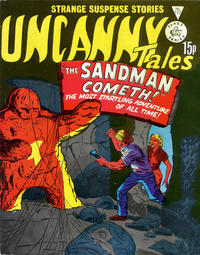 The Sandman Cometh! (Table of Contents: 1)

Job Number
V-225
Genre
science fiction
Characters
Sandman (alien) Steve Bronson; Anne Bronson; Bobby Bronson
Synopsis
A family stumbles across a hostile alien made of sand. The military are helpless, but it is defeated by the family’s bookish son, who uses water to dissolve it and traps it in a bucket.
Reprints
Keywords
monsters

Narrated in the first person. This story is divided into two untitled parts (6 pp, 7 pp). Job number from Tom Lammers and Ger Apeldoorn via the Atlas/Timely discussion group.
Story is pages 3-7, 10-14, 16-18 of comic (pages of story numbered 1 to 13).

The Imitation Man (Table of Contents: 2)

Job Number
V-812
Genre
science fiction
Characters
Carlos Zarago; Pedro Lopez
Synopsis
A dictator forces a scientist to use his duplicator machine on him so that he can have a substitute appear in public places to avoid assassination attempts. The duplicate is too much like the original, however, and refuses to expose himself to danger when he can seize power to rule the country. The dictator returns to the machine with the intent of destroying it only to find it has continually been producing duplicates. While the duplicates are arguing among themselves, a revolution occurs, and the new democratic regime deports all versions of the former dictator.
Reprints

Zaragom the tyrant of an oppressed nation in the story resembles Fidel Castro.

The Mighty Oak! (Table of Contents: 3)

Job Number
V-814
Genre
science fiction
Synopsis
An atomic test gives an oak tree the ability to think and move, and it plots the destruction of humanity's implements of war and crime. At the end of the story the scientists are revealed to be knowledgeable as to what effect the atomic test would have upon the oak and they are willing to accept the oak and its offspring will provide better governance of Earth than humanity.
Reprints

Where Walks the Ghost (Table of Contents: 4)

Job Number
V-159
Genre
horror-suspense
Characters
Big Monk McGak; Mr. Zero
Synopsis
An escaped convict looks to buy a house that has the reputation of being haunted so people will steer clear of him, but when he meets up with a real estate agent turns out to be the ghost that haunts the prospective property, he turns himself in to the police for his own protection.
Reprints

Job number from Tom Lammers and Ger Apeldoorn via the Atlas/Timely discussion group.
Story is pages 20-24 of comic (pages of story numbered 1 to 5).

A Thousand Years (Table of Contents: 6)

Job Number
V-226
Genre
horror-suspense; science fiction
Characters
Mr. Jordan; The Devil ?
Synopsis
A convict is offered freedom and a thousand years of life by a mysterious stranger in return for his name on a contract. He signs, and finds himself freed, and sealed in a rocket flying away from Earth. He feels neither hunger or thirst, so he will live a thousand years alone.
Reprints

The Frightening Fog (Table of Contents: 8)

Genre
science fiction
Synopsis
A mysterious fog envelops the entire world for days, terrifying everyone. It was actually created by benevolent alien peacekeepers to hide Earth from an invasion.
Reprints