Issue is undated. Estimated date based on analysis of brands and cover prices in the series.

First Line of Dialogue or Text
Mere backward Earthlings are no match for superior beings such as we...What th...!
Genre
science fiction
Reprints

Cover is taken from the splash page of "A Look At A Backward Planet". 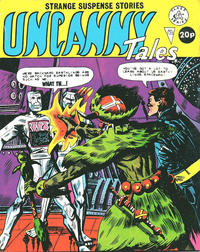 A Look At A Backward Planet (Table of Contents: 1)

Job Number
A-1485
First Line of Dialogue or Text
Before RX23 went down to Earth to seize the widely selected samples of mankind, he scanned our civilization...
Genre
science fiction
Characters
RX23; an Inuit, a U.S. Marine; Mrs. Huntleighshireford; Nguta Lmu; a Russian; a Swede
Synopsis
Six Earthlings defeat their alien abductor.
Reprints

Title has spelling error, should be "Forewarned".

Job Number
A-3065
First Line of Dialogue or Text
It was madness... he knew that it wasn't possible to wipe out an entire enemy fleet but he'd been too long in the outer reaches of space...
Genre
science fiction
Characters
Earthman; Female captain of enemy space fleet
Synopsis
A lone Earthman fends off an attack from another world.
Reprints

The Brain People (Table of Contents: 4)

Job Number
A-1253
First Line of Dialogue or Text
Our scientists have never recorded the existence of a world like this!
Genre
science fiction
Characters
Colonel Peter Randolph
Synopsis
A test pilot visits Atlantis, but has his memories erased.
Reprints

Something in the Sea! (Table of Contents: 6)

Job Number
H-004
First Line of Dialogue or Text
Tod Mann could not take his eyes from her... for she was as strange and restless as the ocean itself!
Characters
Tod Mann; Wanda
Synopsis
A man on a sea cruise sees the Empire State building, the Sphinx, and a Buddha floating on the water and his love interest tells him that she is an Atlantean collecting these object as souvenirs for her people. When the captain later tells him that a movie is being filmed on an island shot with balsa wood replicas of these famous monuments, he thinks the girl was just pulling his leg, but he can't find her on board. After they dock, she doesn't get off, so he asks the film producer about her and is told they don't have such an actress and there will be no movie as all the props were stolen.
Reprints

Script credit from Newman's log book, The Comics! Vol. 14, No. 8 (Aug. 2003). Other information on this sequence from Tom Lammers and Ger Apeldoorn via the Atlas-Timely discussion group.

But for Bluey (Table of Contents: 7)

First Line of Dialogue or Text
When I tell you my name is George Morrison then I am certain you will recognize me.
Genre
fantasy-supernatural
Characters
George Morrison; Helen Witlow; Joe Witlow; Bluey
Synopsis
George is rescued from a drifting fishing boat, thanks to his cat.
Reprints

Job Number
5244
First Line of Dialogue or Text
Over and over again, Hugh Tenant told himself that a dream is a dream, no matter how real it may seam!
Genre
horror-suspense
Characters
Hugh Tenant
Synopsis
A man dreams of a disaster in the air.
Reprints

The Earth Snatchers (Table of Contents: 9)

Job Number
A-3221
First Line of Dialogue or Text
All was serene on our war-torn planet...
Genre
science fiction
Characters
Miss Dillon; Commander Kern; Kurtz; Captain Edwards
Synopsis
Aliens move the Earth to orbit near their planet to strip its resources.
Reprints