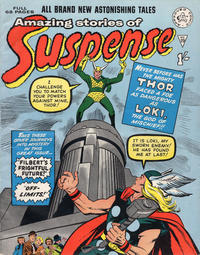 This story is divided into two parts: an unmarked first part (5 pp) and part two—"The Vengeance of Loki!" (8 pp).
This is the first appearance of Asgard. Balder, Tyr and Odin only appear from behind, and Heimdall looks nothing like his later appearances.
The first part is expanded and retold in Thor: First Thunder (Marvel, 2010 series) #2.

The Frightened Ones! (Table of Contents: 5)

The Floating Island (Table of Contents: 7)

The Clock (Table of Contents: 8)

The Man Who Left No Prints (Table of Contents: 9)

The Strange Wife of Henry Johnson! (Table of Contents: 11)

Those in Hiding! (Table of Contents: 15)

Ends on inside back cover.