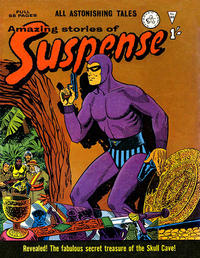 The Treasure of the Skull Cave (Table of Contents: 1)

Genre
adventure; jungle; superhero
Characters
The Phantom; Cappy Swargo; Pirate Pete; the General; Guran; Bandar
Synopsis
A group of swindlers, con-men, and revolutionaries team up to loot the treasure of the Phantom's Skull Cave, killing him and the Bandar with poison gas. One crook gains entry to the cave by deceit, only to be appalled when the Phantom shows off priceless historical treasures -- worthless antiques to him. When the Phantom and the Bandar round up the gang, the enraged other crooks readily recognize the value of these artifacts, and of the Phantom's "minor" treasure rooms, heaped with gold and jewels.
Reprints
Keywords
Skull Cave; treasure hunt

Told in two parts, 15 and 9 pages long. The second part is called "Treasure of the Skull Cave".

Job Number
V-105
First Line of Dialogue or Text
A strange egg rests on the ground--shunned by both plant and animal life!
Genre
science fiction
Characters
Monsteroso
Synopsis
A creature hatches from an egg and imagines itself lord of all it surveys, but it is suddenly drowned, as it is only a microbe in a scientist's culture.
Reprints

This story is an altered retelling of "Earth Will Be Destroyed!" drawn by Steve Ditko in Tales of Suspense (Marvel, 1959 series) #9 (May 1960). Stan Lee is given a speculative writing credit based on his authorship of another retelling of the same story. Nick Caputo also suspects Lee's scripting as examined in his blog: http://nick-caputo.blogspot.com/2011/11/who-authored-ditko.html

I Was Trapped in Nightmare Valley (Table of Contents: 3)

Job Number
T-694
First Line of Dialogue or Text
Fool!
Genre
science fiction
Characters
Frank Savage; Maharaja of Banpur
Synopsis
An explorer encounters sentient, extraterrestrial trees in Asian mountains. They plan to spread their pollen all over the Earth, but they are fortuitously destroyed by a volcano.
Reprints
Keywords
Himalayas

Throw Another Coal on the Fire (Table of Contents: 4)

Menace From Mars (Table of Contents: 5)

Flash Gordon and the Space Pirates [Part 1] (Table of Contents: 6)

The Monster (Table of Contents: 7)

Beware the Eyes of Igor! (Table of Contents: 8)

Job Number
T-758
First Line of Dialogue or Text
Look into my eyes...
Genre
science fiction
Characters
Igor
Synopsis
A hypnotist uses his power to rob a movie theatre, but accidentally hypnotizes himself and forgets the whole plan.
Reprints

Those Terrible Teen-Agers! (Table of Contents: 9)