The Mystery of the Black Box! (Table of Contents) 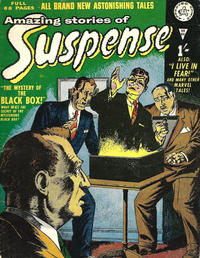 Meet The Fly... Master of the Insect World! (Table of Contents: 1)

A recap of the powers and abilities of the Fly. Reinman art per Nick Caputo, November 2016.

I Live In Fear (Table of Contents: 2)

Job Number
L-36
Synopsis
A reporter regrets getting his scientist friend to test out his invisibility ray on him when he detects non-human invisible creatures following humans around. When they detect him, they pursue him, and the reporter fears for his life. When the ray wears off the scientist tells him the creatures he saw must have been an effect of the ray, but the reporter doesn't believe so and expresses concerns as to what the creatures were.
Reprints

Behind the Veil (Table of Contents: 3)

A Monster Waits Outside!! (Table of Contents: 4)

Job Number
T-876
Genre
science fiction
Characters
Maj. Ford
Synopsis
An astronaut is sent into orbit in a tiny sphere without communication. He sees a monster trying to claw its way in and panics, signalling ground control to bring him back. They think that it was a hallucination, but they find a broken claw on the spacecraft.
Reprints

Narrated in the second person. This story was retold with some differences in Tales of Suspense (Marvel, 1959 series) #24 (December 1961) as "The Insect Man" drawn by Jack Kirby. Job number from Dr. Michael J. Vassallo via the Atlas/Timely discussion group. Story is pages 28-32 of comic (pages of story numbered 1 to 5).

The Lizard (Table of Contents: 5)

My Nightmare Has No End! (Table of Contents: 6)

Job Number
[T-874]
Genre
horror-suspense
Synopsis
A man meets an extradimensional being in his nightmares. The being tells him that the world he comes from is a paradise, but boring, and offers to switch places. The man agrees, but the traveller wakes up to find that he entered the dreams of a prisoner.
Reprints

This story was reprinted as "I Am the Beast Man!" in Fantasy Masterpieces #4. This story was also retold in Strange Tales (Marvel, 1951 series) #94 (March 1962) as "He Came from Nowhere!" by Stan Lee, Larry Lieber and George Tuska, but with the alien having the last laugh. Job number from Dr. Michael J. Vassallo via the Atlas/Timely discussion group.