The Sinister Agents of The Nameless One! (Table of Contents) 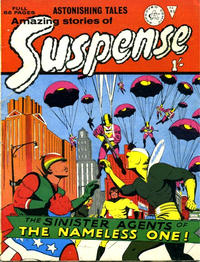 Job Number
V-867
First Line of Dialogue or Text
Of all the planets in the known galaxy, this particular one was off-limits!
Genre
science fiction
Characters
Rip van Winkle
Synopsis
This story casts the character of Rip Van Winkle as a humanoid alien who visits planet Earth in violation of galactic travel guidelines which have declared the planet off limits due to its dormitive effect.
Reprints

Job number from Tom Lammers and Ger Apeldoorn via the Atlas/Timely discussion group. Letters credit is from The Mighty Thor Comics Index #5 by George Olshevsky.

The Sinister Agents of the Nameless One (Table of Contents: 2)

Genre
superhero
Characters
Mighty Crusaders [Fly Man; Fly Girl; Shield; Comet; Black Hood]; the agents of D.E.M.O.N. (Destruction, Extortion, Murder, Oppression, Nefariousness-- a terrorist group); The Terrific Three [Mr. Justice; Steel Sterling; Jaguar]; The Ultra Men [Fox; Web; Captain Flag]; Jack Desmond (agent of A.U.N.T.I.E.); The Nameless One; the Spider
Synopsis
The Mighty Crusaders and two new super teams called the Ultra Men and the Terrific Three battle the Nameless One and his agents codenamed D.E.M.O.N. The Spider learns that the Nameless One has captured all of the heroes and invades his headquarters determined to kill the heroes himself. But the Spider inadvertantly frees the heroes from their peril.
Reprints

Menace of the Mirror (Table of Contents: 3)

Job Number
M-352
Genre
science fiction
Characters
Raynor; Garson
Synopsis
A scientist thinks he has invented a machine to give life to reflections in a mirror, but when he tests it he realizes that he himself is a reflection.
Reprints

Those in Hiding! (Table of Contents: 4)

Horse of Horrors! (Table of Contents: 5)

The Strange Wife of Henry Johnson! (Table of Contents: 7)

The Man Who Left No Prints (Table of Contents: 8)

The Frightened Ones! (Table of Contents: 9)