Issue is undated. Estimated date based on analysis of brands and cover prices in the series. This issue is a shortened version of Amazing Stories of Suspense #21. Issue indexed from GCD Error Report 12340 by Ger Apeldoorn.

He Floats Thru the Air! (Table of Contents)

Cover credits obtained from an article in From The Tomb #10 (June, 2003) by Dr. Michael J. Vassallo and Frank Motler via the GCD Comics Database List. 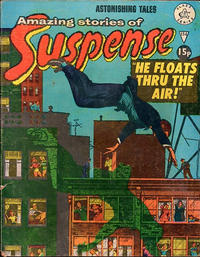 He Floats Thru the Air (Table of Contents: 1)

What Was the Staggering Secret of the 13th Floor (Table of Contents: 2)

Job Number
V-588
First Line of Dialogue or Text
Willy Sloane operated the oldest elevator in the oldest hotel in town!
Genre
horror-suspense
Characters
Willy Sloane; Mr. Jordan
Synopsis
An oddly cheerful elevator operator is held at gunpoint with a passer-by by a spy planning to blow up the hotel. The elevator lets the spy off at the 13th floor, and while the passer-by is terrified, the elevator operator simply fades away, explaining that the bomb will never go off, since there is no 13th floor.
Reprints

The Patient in Room 3D (Table of Contents: 3)

Job Number
V-305
Genre
science fiction
Synopsis
Doctors perform an operation to increase brain power, hoping to find an answer to the world's problems, but the patient is still not intelligent enough to solve them. The doctors are disappointed, and allow the patient, a monkey, to regain his natural intelligence.
Reprints

Narrated in the second person.

Will This Be the End of the World? (Table of Contents: 4)

Job Number
V-306
Genre
science fiction
Synopsis
A baseball player's mitt is infested with tiny humans with enough rockets to evacuate their entire world as they see the baseball hurling towards them.
Reprints

Job Number
V-589
First Line of Dialogue or Text
Our scene is an outpost in Africa!
Genre
horror-suspense
Characters
Quogg
Synopsis
A fugitive hides in an enclosure said to contain a horrible monster, and realizes too late that the monster appeared to be an ordinary hut.
Reprints
Keywords
Africa

Menace from Mars! (Table of Contents: 7)

Job Number
V-346
Genre
science fiction
Synopsis
Martians come to Earth to discover if humans represent a threat to them. They question a human using a machine to verify his answers, and find that he is totally free of greed, hatred or deceit. The Martians leave satisfied, unaware that they questioned a mental patient.
Reprints

"Sdrawkcab" is "Backwards" spelled backwards. Originally published in Mystic (Marvel, 1951 series) #50 (August 1956) under the title "The Strange One."

Forever Is a Long Long Time! (Table of Contents: 9)

Job Number
V-379
Genre
science fiction
Characters
Luther Kane; Dr. Jonathan Weems
Synopsis
A greedy businessman bullies a scientist into giving him a device that can give humans the 1,000-year lifespan of a giant redwood. He ignores the scientist's warnings and uses the ray on himself alone in his mansion, finding to his horror that the ray also renders its subject as immobile as a redwood.
Reprints

Narrated in the first person. This story is a retelling of "I Can Live Forever!" drawn by John Forte, in Journey into Mystery #55 (November 1959). The original has a more sympathetic main character and a happy ending. Possible Lee plot/Lieber script per Nick Caputo. Original indexer credited Stan Lee solely based on his later plot credit for another version of this story in Journey into Mystery #103 (April 1964).

The Thing in the Black Box! (Table of Contents: 10)

Job Number
V-377
Genre
fantasy-supernatural
Characters
Dan Harper; Pandora
Synopsis
A shipwrecked man meets the legendary Pandora, who tricks him into releasing the demons from her box. Humanity is helpless against the demons, but the man forces Pandora to recall them by dispelling her illusory beauty.
Reprints
Keywords
monsters

Narrated in the first person. Ayers inks per Nick Caputo, September 2014. Jim Vadeboncoeur Jr. credits Marvin Stein but Nick sees no evidence of his inking on this story. This story is retold in Chamber of Darkness (Marvel, 1969 series) #3 (February 1970) as "Something Lurks on Shadow Mountain" by Roy Thomas and John Buscema.

The Careless Man (Table of Contents: 11)

Dr. Haunt is the narrator. This story was likely inventory scheduled for This Magazine Is Haunted.