Slave of the Amazon Queen (Table of Contents) 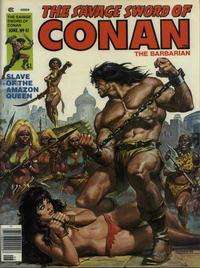 Genre
sword and sorcery
Characters
Conan
Synopsis
Conan, holding an axe in both hands, standing with his right foot on the throat of a large, dead reptile at the edge of some water.
Reprints

First Line of Dialogue or Text
The throne of sea-faring Zingara is in danger!
Reprints

The Quest for the Cobra Crown (Table of Contents: 4)

Adapted from the novel Conan the Buccaneer by L. Sprague de Camp and Lin Carter.
Continued in next issue.

First Line of Dialogue or Text
Critical interest in Robert E. Howard and in Conan seems to be growing...
Characters
Conan
Reprints

The Ballad of Bêlit (Table of Contents: 6)

First Line of Dialogue or Text
Now that Conan the Barbarian #100 has come, if not gone...
Genre
sword and sorcery
Characters
Conan; Bêlit
Reprints

Five character studies of Belit by Buscema/Gan. Two versions of the Conan #100 cover (by Buscema/Chan and Severin/Chan) and a prelim by Marie Severin.

The Return of Sir Richard Grenville (Table of Contents: 7)

Adapted from the poem "The Return of Sir Richard Grenville" by Robert E. Howard.