Most pages in this issue are tinted green (the colour chosen to match the Hulk, as Spider-Man Comics Weekly, for its first several issues, was tinted red, to go with parts of Spidey's costume); untinted pages are pages 7/8, 13/14, 27/28, 33/34. 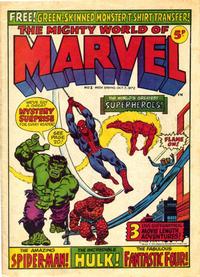 The Coming of the Hulk (Table of Contents: 1)

Slight layout changes, typically some top and/or bottoms of panels cropped slightly in height so the pages fit the UK page size.

The two chapters are printed as one in this reprint. The title page to chapter 2 of the original (page 7) has been omitted to bring the page count down from 11 to 10.

"The Hulk Strikes!" chapter is from the reprint from Marvel Collectors' Item Classics (Marvel, 1965 series) #14, you can tell this due to the text blurb caption at the bottom of the page at the end of the chapter.

The Mighty World of Marvel Pin-Up Page! (Table of Contents: 3)

This is a reprint of the cover of Fantastic Four #1, minus all cover text; new text proclaims the scene to be a symbolic one, showing one of the "marauding minions" of the Mole Man; a flash at the bottom of the page announces that readers will meet him next week [as this issue reprints the origin half of FF #1 only]. The cover has been recoloured (for instance, Sue's red dress of the original cover is here coloured blue, as are the Thing's trunks and Reed's entire outfit - this is presumably an attempt to make their clothes resemble the costumes of a little later). This is a “missing-man” version of the cover, i.e. two of the five startled bystanders depicted in the original art. are absent here. Lastly, an extra floor or two has been added to the buildings on the right.
Located between the 7th and 8th pages of the Hulk story.

The Fantastic Four (Table of Contents: 5)

Genre
superhero
Characters
The Fantastic Four [Mr. Fantastic [Reed Richards]; the Thing [Ben Grimm]; Invisible Girl [Sue Storm]; Human Torch [Johnny Storm]] (introduction, origin); the Mayor of Central City
Synopsis
Mysterious events occur in Central City, as an invisible woman alarms the citizens, a lumpy-skinned monster stalks the streets and a blazing human figure flashes across the sky; these three unearthly people have been summoned to the presence of a fourth, a man with elastic limbs. Once they gather, the tale is told as to how Susan Storm, Ben Grimm, Sue's brother Johnny and Reed Richards gained their strange powers: during an attempt to be the first into space, where their ship's shielding proved ineffective against cosmic rays, and they returned to Earth ... more than human.
Reprints

Printed in black and white with most pages (1-10 & 13) tinted green. Various small changes are made to dialogue in the story: one example is the last panel of story page 7, where the Torch's assessment that the missile "has a nuclear warhead" is amended to "an explosive warhead" (and quite right too); in another example, on story page 9, panel 2, "the commies" becomes "the Russians", while the dialogue in panel 4 is completely omitted. On story page 14, panel 2, the "Americanism" " ... period" is removed, while in panel 5 the shape of the dialogue is altered by changing the first speaker from Sue, to Reed; Ben's speech is then directed not at Sue but at Reed, calling him "a prissy dummy"! Panel 6 then further alters Ben's speech, basically removing all reference to the early notion that Ben was jealous of Reed with regard to Sue. In addition, this editing leads to an alteration on story page 13, panel 8, where Ben credits Reed with naming him "the Thing" rather than Sue.
This story covers pages 15-19 and 22-29.

Message from Stan Lee about the launch of Marvel U.K. and details of "The world's greatest free gift offer!": for ten weeks, each issue will bear a numbered coupon - collect eight and mail them in for the gift; along with a coupon, each issue will also carry a clue to the mystery gift. This issue, coupon no. 1 shows the Hulk's face, and the clue is: "It's bigger than a breadbox!"
This centrespread is located between pages 5 & 6 of the Fantastic Four story.

Genre
superhero
Characters
Spider-Man [Peter Parker] (introduction, origin); Ben Parker (introduction); Crusher Hogan; Flash Thompson (introduction); Liz Allen (introduction); May Parker (introduction); the Burglar
Synopsis
Orphan Peter Parker, "professional wallflower", brought up by his Aunt May and Uncle Ben, is bitten by a radioactive spider and gains the proportionate abilities of an arachnid. Making a costume and devising webshooters, he chooses to use those abilities to achieve fame and make money, as Spider-Man, TV star. When he fails to stop a takings thief who runs past him, despite the ease with which he could have done so, his uncle is later killed as a result. He therefore learns to his cost that with great power there must also come great responsibility.
Reprints

Part 2 title-page (original story page 7) omitted.
Pages 1-2 and 5-9 of this reprint are tinted green. Pages 3-4 are black & white. Page 10 is on the back coverof the comic and is in printed in full-color.