Most pages in this issue are tinted green; untinted pages are 7/8, 13/14, 27/28 and 33/34; however, these pages, while without the bright green inking of the rest of the comic, have an eerie very pale green hue overall.

The Search for the Hulk! (Table of Contents)

Pencils and inks credits from Nick Caputo via the GCD Error List (15 March 2007). 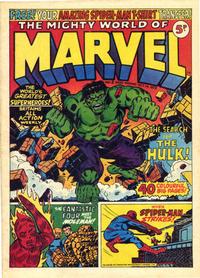 The Search for the Hulk (Table of Contents: 1)

Genre
superhero
Characters
The Hulk [Bruce Banner]; Rick Jones; General Thunderbolt Ross; Betty Ross; Igor (death); the Gargoyle (introduction)
Synopsis
Igor, the captured spy, secretly contacts his master, the malformed Soviet scientist known as the Gargoyle, and informs him of the Hulk's existence. At nightfall, Banner's worst fears are realised and he transforms again, only to be captured by the Gargoyle, and he and Rick are taken to Russia. Journeying east towards the rising sun, however, triggers the Hulk's change back to Banner. Dr Banner realises he can cure the Gargoyle's affliction, and in return the now-normal scientist gives Bruce and Rick their freedom. After they leave, the Gargoyle destroys his stronghold and seemingly himself.
Reprints

References to "comrade", the "Iron Curtain" etc. are removed/rewritten throughout, in an attempt to eliminate the Cold War anti-Soviet tone. A fine example of this attempt is story page 23, final panel, where the Gargoyle addresses a portrait of (presumably) Nikita Khrushchev - in this reprint, the portrait is given a moustache and a nameplate is added above the picture, which can be partially read: "IG BROTHE".

The Mighty World of Marvel Pin-Up Page! (Table of Contents: 2)

A color reprint of the pin-up from Fantastic Four #2, January 1962. Most of the text on the page is as the original, but some has been rewritten (writer and letterer unknown).
This follows page 8 of the Hulk story and precedes the Hulk pin-up.

The Mighty World of Marvel Pin-Up Page! (Table of Contents: 3)

A color reprint of the cover of Incredible Hulk #1, May 1962. Only the art is reproduced; all cover text is removed and new text added (writer and letterer unknown). Also, the coloring has been redone throughout, the Hulk's grey skin being recolored green for instance.
This follows the Thing pin-up and precedes an ad page.

The Fantastic Four Meet the Mole Man! (Table of Contents: 5)

Genre
superhero
Characters
The Fantastic Four [Mr. Fantastic [Reed Richards]; the Thing [Ben Grimm]; Invisible Girl [Sue Storm]; Human Torch [Johnny Storm]]; Mole Man [Moleman] (introduction); Monsters of Monster Isle
Synopsis
Atomic plants disappear all around the world. Reed Richards pinpoints a place which is at the same distance from them all: Monster Isle. Travelling there in their private jet, the team soon discover the island lives up to its name. A cave-in sends Reed and Johnny plummeting into the realm of the man behind the monsters and the plants' destruction: the Moleman, an embittered, half-blind refugee from the surface world. He reveals his plan to destroy that world to his captives, just before Ben and Sue stage a rescue; the FF escape, and the Moleman destroys the island, sealing himself below.
Reprints

As well as small edits here and there, the part heading on story page 20 ("The Moleman's Secret!") has been omitted, although the panel itself remains untouched. Another interesting edit is the removal of Ben's bitter comments about Reed in panel 4 of story page 21.
Printed in black & white, although pages 1-7 & 10-11 are tinted green.

This is a full-color centrespread (between pages 3 & 4 of the Fantastic Four story), in which Mr Fantastic [Reed Richards] explains again about the "Mighty Marvel mystery gift", whereby, once eight of the weekly coupons have been collected, they can be mailed in, for the free gift.
Contains Coupon no. 2.
Meanwhile, this week's clue to the nature of the gift is: "It's as colourful as a rainbow!"

Get These Star Gifts with Action Man (Table of Contents: 7) (Expand) /

The Mighty World of Marvel Pin-Up Page! (Table of Contents: 8)

This is a full-color reprint of the cover of Fantastic Four #2, January 1962. As with other such pin-up pages, all the original cover text has been removed, and new text written (writer and letterer unknown). As in MWoM #1, the cover is presented here as a "sizzling scene from NEXT WEEK'S "Fantastic Four" thriller", as a teaser. The coloring has also been redone.
Located between pages 10 & 11 of the Fantastic Four story.

Genre
superhero
Characters
Spider-Man [Peter Parker]; J. Jonah Jameson (Introduction); The Burglar (Flashback); May Parker; Flash Thompson; Liz Allen; John Jameson (Introduction)
Synopsis
After thinking over his origin, Peter Parker contemplates using his powers to commit crimes, when he realises how impoverished his Aunt May has become without Ben. Deciding instead to return to his performing act to raise money, he soon discovers that keeping his identity secret is a major barrier to cashing checks. Meanwhile, publisher J. Jonah Jameson begins his campaign against the "public menace" of Spider-Man, presenting his test-pilot son John as a "real" hero. Jameson's editorials put paid to Spidey's TV career, leaving Peter frustrated at his inability to help out his aunt.
Reprints

In an unusual editing oversight, the reference to "the Ant Man" in panel 6 of story page 5 is left intact here, despite that hero not being introduced yet into the Marvel UK universe.
Page 1 is printed in black & white. Pages 2-6 are tinted green.

The Mighty World of Marvel Pin-Up Page! (Table of Contents: 11)

This is a full colour pin-up of Spider-Man. It appears to be a modified form of Steve Ditko's unused cover for Amazing Fantasy #15.