The Monster or the Machine? (Table of Contents)

Pencils and inks credits from Nick Caputo via the GCD Error List (15 March 2007). 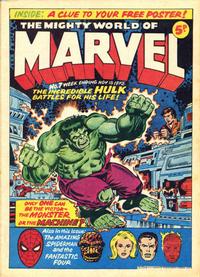 The Monster and the Machine! (Table of Contents: 1)

Between page 7 of the Hulk story and the letters page.

First Line of Dialogue or Text
Dear Marvel, having just finished my issue of The Mighty World of Marvel, I must write and tell you that I was really scared when the Toad Men invaded the world.

Between the Spider-Man pin-up and page 8 of the Hulk story.

Colour panels from previous issues (one of the Hulk, one of Spider-Man, and two of the Fantastic Four) accompany the letters.

As the Human Torch doesn't appear in the nine pages of the story reprinted herein, his "blurb box" on the splash page is replaced with a flash containing the text "The world's most HUMAN fantasy-adventurer battles the Earth's most INhuman menace!!"