First Line of Dialogue or Text
The amazing Spider-Man? Bah! You are nothing against Dr. Octopus!
Genre
superhero
Characters
Spider-Man; Doctor Octopus 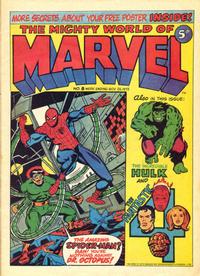 The Gladiator from Outer Space! (Table of Contents: 1)

All references to anything "Soviet", "Communist" or "Red" are amended throughout this story (as they generally are in Marvel UK's reprints); examples are "jet" for "MiG", "to the homeland" for "behind the Iron Curtain", "ya creeps" for "comrades", "the Hulk's foes" for "the wily Reds" and "would-be conquerers" (sic) for "Communists".

The Incredible Hulk (Table of Contents: 2)

Between pages 7 and 8 of the Hulk story.

The Fight to the Finish with Dr. Octopus (Table of Contents: 3)

Page 12 introduces the second half of the story with a "new" splash page, which appears to be composed of diverse elements from elsewhere: there is an inset top right of Dr Octopus which is clearly by Ditko, a blurb in the bottom left corner ("Plus: a special guest appearance by the Human Torch!") which from its style is definitely from a previous US Marvel (splash page or cover), and between those two elements a full-page illustration of Spidey which is also by Ditko, not enlarged from within a story but perhaps taken from a splash page or pin-up.

The new splash page featuring the figure of Spider-Man is the pin-up page from The Amazing Spider-Man (Marvel, 1963 series) #3, with all the text elements replaced. The figure of Doctor Octopus is from the original issue, story Page 5, panel 3.

Here It Is! More Wild Info about Your Free Full Color Poster! (Table of Contents: 4) (Expand) /

The Secret of Spider-Man's Mask! (Table of Contents: 5)

Between page 3 of the Spider-Man story and the letters page.

First Line of Dialogue or Text
Dear Stan, when the Human Torch "flames on" he can melt metal, turn rock into boiling lava, and create a burst of nova-like brightness.

Between the Spider-Man's mask pin-up and page 4 of the Fantastic Four story.

Three colour panels from earlier issues (one each from Spider-Man, the Fantastic Four, and the Hulk) accompany the letters.