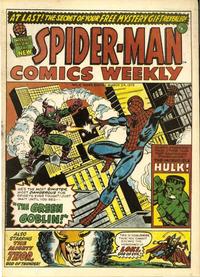 The Grotesque Adventure of the Green Goblin! (Table of Contents: 1)

Some pages in black and white.

The Vengeance of Loki! (Table of Contents: 2)

Job Number
[V-998]
First Line of Dialogue or Text
Once again, Loki, most dangerous of the Norse gods, returns to give the mighty Thor his greatest challenge!!
Genre
superhero; fantasy-supernatural
Characters
Thor [Doctor Donald Blake]; Loki; Jane Foster; Odin (cameo); Heimdall (cameo)
Synopsis
Loki discovers Thor’s secret identity and separates him from his hammer, forcing him to remain a human. Loki torments humanity, but Dr. Blake tricks him into allowing him to regain the hammer and become Thor, defeating Loki and returning him to Asgard.
Reprints

Some pages are black and white, back cover is full colour.