The Devil Trees of Gamburu (Table of Contents) 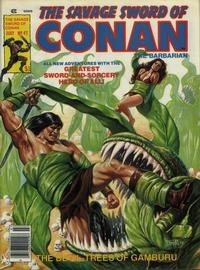 First Line of Dialogue or Text
The throne of sea-faring Zingara is in danger!
Reprints

First Line of Dialogue or Text
Conan is helpless in the city of the Amazons--drugged by his queen and lover, the jealous Nzinga.
Genre
sword and sorcery
Characters
Conan; Chabela; Sigurd; Juma; Nzinga (villain); Thoth-Amon (villain)
Reprints

Adapted from the novel Conan the Buccaneer by L. Sprague de Camp and Lin Carter.
Continued in next issue.

A Gazetteer of the Hyborian World of Conan, Part 9 (Table of Contents: 5)

Information from Wadai to Zug.

Introduction to "Kings of the Night" (Table of Contents: 6)

Kings of the Night (Table of Contents: 7)

Adapted from Robert E Howard's short story, "Kings of the Night".
Continued in next issue.