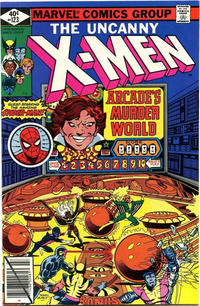 "Listen--Stop Me If You've Heard It--But This One Will KILL You!" (Table of Contents: 2)

Page 17, panel 1: Colossus shows up with a new outfit and calls himself ‘the Proletarian.’ Anchored in Marxist-Leninist philosophy, basis of communism doctrine, the proletariat represents the social class of workers, ‘the proletarians,’ opposed to the capitalist class. The proletarian designates a worker, a peasant, or an employee who lives only on his salary. The costume Colossus wears includes several explicit references and symbols to soviet communism: The worker’s red cap and overalls, the initials ‘ C.C.C.P.,’ Cyrillic acronym translated as ‘Union of Soviet Socialist Republics’, for U.S.S.R.; the face of Lenin, architect of communism and first Chairman of the Council of People’s Commissars of the Soviet Union, highest governmental authority; and the sickle and the hammer, ancient symbols of the U.S.S.R flag and Communist ideology (the sickle for agriculture, and the hammer for industry). When this comic was published in 1979, relations between U.S.A. and U.S.S.R. were still very tense due to the Cold War. Both countries ideologically and, therefore, politically, were wholly opposed. Recall that Colossus’ character, Piotr Nikolaievich Rasputin, is of Russian origin and was raised on a Siberian farm.

The Thing and the Ultimate Weapon! (Table of Contents: 5) (Expand) /