Requiem for a Deadman (Table of Contents) 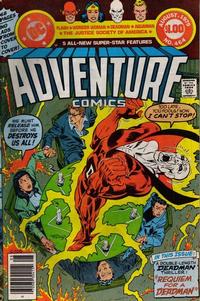 The Day Up Was Down (Table of Contents: 2)

Requiem for a Deadman! (Table of Contents: 3)

Originally intended for the unpublished Showcase (DC, 1977 series) #105. Story printed in the limited distribution Cancelled Comic Cavalcade (DC, 1978 series) #2. Original version of the story had a 2-page sequence of Deadman saving a boy during the time he is travelling across town (between panels 2 and 3 on page 4 of this version of the story). Per the text page prepared for Showcase (DC, 1977 series) #105 and printed in Cancelled Comic Cavalcade (DC, 1978 series) #2, Wein wrote the first twelve pages of the original story (edited here to the first 10 pages) and Conway wrote the rest without knowing how Wein intended to finish the story.

To Everything There Is a Season... (Table of Contents: 4)

Slave of the Queen Bee (Table of Contents: 5)

Invaders from Above (Table of Contents: 6)

Job Number
J-5953
Genre
superhero
Characters
Aquaman [Arthur Curry]; Stavros Markos (villain); Dr. Vulko; Topo
Synopsis
Aquaman goes up against a wealthy tycoon who is pretending to clean up the seas above Atlantis while his men loot it.
Reprints

Inside back cover. Letters from Gary Norman, Charles Reiter, Jr. and Scott Gibson with house ad for DC Comics Presents and Justice League of America

On back cover of comic.