The Black Lightning and Shazam! stories have final-panel blurbs indicating they will next be see in 5 Star Super-Hero Spectacular, a title seen in DC house ads in July-dated comics, but never released. Black Lightning, Shazam!, and Green Arrow were to join Wonder Woman and Plastic Man in that Dollar Comic title to be edited by Ross Andru and World's Finest was to go to standard size and be edited by Julius Schwartz. But after some consideration, it was decided to cancel plans for the new title and keep World's Finest as a Dollar Comic, so Black Lightning, Shazam!, and Green Arrow remained in this title. See The Comic Reader #170 for more information.

The Krypton Curse (Table of Contents)

wraparound cover with the art divided between Adams and Giordano 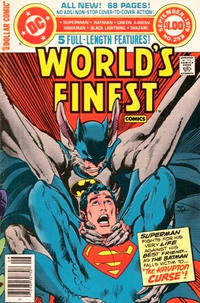 The Curse of Krypton! (Table of Contents: 2)

The Blood of the Lamb! (Table of Contents: 3)

One Man Can Cry (Table of Contents: 4)

The Courtship of Captain Nazi (Table of Contents: 6)

Inside back cover. Letters of comment from Neil Ahlquist, Mike Lanzalotti and Gary Thompson.