On-sale date from The Comic Reader #169.
This issue has variants:

The Dramatic Return of Phoenix! (Table of Contents) 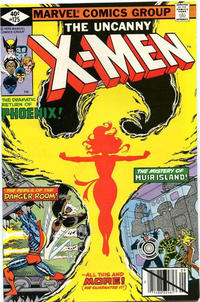 There's Something Awful on Muir Island! (Table of Contents: 2)

Page 7, panels 3-6: Magda Eisenhardt’s character is briefly mentioned for the first time as Magneto’s late wife. This information, together with that published in August 1979 a month earlier, pages 2-3 in The Avengers #186, infers that Magneto is, in fact, the natural father of Wanda and Pietro Maximoff, alias the Scarlet Witch and Quicksilver.


A famous quote from William Shakespeare inspires this episode’s title: "There’s something rotten in the state of Denmark" (Hamlet. Act 1, scene 4). From this issue to X-Men #128, authors will refer titles to some famous Shakespeare’s quotes.

Letters of comment from Sheldon Wiebe and Jana C. Hollingsworth. Includes a small promo for Spider-Woman.