On-sale date from Comic Reader #170.
This issue has variants: 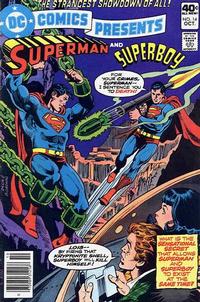 Job Number
S-3180
Genre
superhero
Characters
Superman; Superboy; Pete Ross (villain); Lois Lane; Lana Lang; Jimmy Olsen; Perry White; Steve Lombard; Krypto
Synopsis
Superman is surprised by an attack from Superboy -- actually Pete Ross who has used both a time-traveling machine and a mind-transfer machine to draw Superboy into the future and switch minds with him -- who puts Superman on trial before his own friends, accusing Superman of allowing his son Jon Ross to be taken by aliens. When the jury refuses to convict Superman, Pete prepares to execute him. But back in Smallville, Superboy, in Pete's body, has broken loose and summoned Krypto. Krypto attacks Pete and frees Superman, and Pete and Superboy are restored to their proper bodies.
Reprints
Keywords
green kryptonite