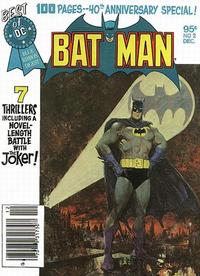 The Forties (Table of Contents: 2)

The People vs. the Batman (Table of Contents: 3)

Story includes a diagram of the Batcave.

The Fifties (Table of Contents: 6)

Top of cover reprint is cut off to accommodate text heading at top of page.

The First Batman (Table of Contents: 7)

Retelling of the origin of Batman.

The Sixties (Table of Contents: 9)

Original title was "The Cry of the Night Is-- 'Sudden Death!'" Re-write of "Case of the Chemical Syndicate" from Detective Comics #27.

The story is relettered with larger text to accommodate the digest pages. Pages #8 and #11 are expanded to full pages. A box announcing a reprint of The Case of the Chemical Syndicate in Detective #387 is removed. A new box describing the difference between the two versions is added. This is the version reprinted in Detective #627, enlarged to standard page size.

The Seventies (Table of Contents: 11)

Synopsis
Brief overview of Batman's first 40 years in the comics.