After this issue Adventure Comics was to be reduced to standard size in anticipation of a new Dollar Comic to be edited by Ross Andru called 5 Star Super-Hero Spectacular, mentioned in DC house ads in July-dated comics. When plans for 5 Star Super-Hero Spectacular were cancelled, Adventure was put back on the schedule as a Dollar Comic. Because of the changes in plans, the Justice Society would need to be replaced for an issue or more, and a Green Lantern story was created to take its place in #467. That Green Lantern story would eventually see print in Green Lantern #128. But plans changed again and the following issue came out at standard size featuring Plastic Man (originally planned to run in 5 Star Super-Hero Spectacular) and a brand-new Starman series. See The Comic Reader #170 for details. 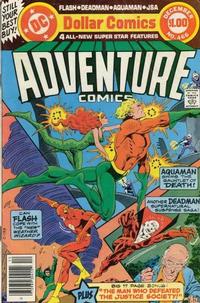 The Cloud with the Lethal Lining! (Table of Contents: 1)

Green Lantern vs Triclops Three-Eyed Keeper of the Cave (Table of Contents: 3) (Expand) /

The Defeat of the Justice Society! (Table of Contents: 4)

Death on Ice (Table of Contents: 5)