Listed as Dynabrite Comics in Overstreet.

No Such Varmint (Table of Contents) 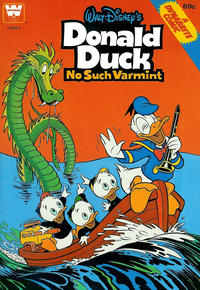 The inside front cover and inside back cover are blank.

No Such Varmint (Table of Contents: 2)

Job Number
OS 318-02
Genre
anthropomorphic-funny animals; humor
Characters
Dewey Duck (featured); Donald Duck (featured); Huey Duck (featured); Louie Duck (featured); Uncle Scrooge (guest)
Synopsis
An aptitude test says that Donald should be a great detective, so he is hired to investigate the mysterious sinking of one of Uncle Scrooge's gold ships. Donald's true aptitude is that of a snake charmer, though, and his playing so charms a huge sea serpent that he has to keep playing for days.
Reprints
Keywords
boats; dragons; music; oceans; snakes; water

Bolivar is named Bornworthy. It's thought that the editors of the Donald Duck strip thought that the dog being named Bolivar would be seen as a slight against Simon Bolivar, a Venezuelan patriot of the time. For a while, Bolivar's name was changed to "Bornworthy," though later strips reverted his name to Bolivar (with the occasional nickname of "Bernie").

This is a reprint of the official first appearance of the Junior Woodchucks from Walt Disney's Comics and Stories (Dell, 1940 series) v11 #5 (125), but the origins of the group can be traced back to the shorts, Good Scouts (1938) and Sea Scouts (1939), both written by Carl Barks.

The last word in comics! DYNABRITE! From Whitman. (Table of Contents: 5) (Expand) /