On-sale date from Comic Reader #174.
This issue has variants: 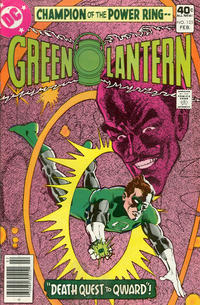 Shhh Don't Let Lois Lane Find Out You're a Friend of Superman (Table of Contents: 1) (Expand) /

Green Lantern discovers the secret of Sinestro's ring. This multi-issue story is christened "Power War." Besides Hal, it is also revealed that Tom Kalmaku is back working at Ferris Aircraft.

The Human Adventure Is Just Beginning. (Table of Contents: 3) (Expand) /

Now, From the Greatest Movie of All Time Comes the Kenner Star Wars Toy Collection! (Table of Contents: 8) (Expand) /

Soon the Screen Will Be Bombarded by the Most Explosive Barrage of xxxx Ever Filmed (Table of Contents: 10) (Expand) /

Letters from Charles D. Brown, Tamsyn O'Flynn, and Tony Edwards, with an illustration.