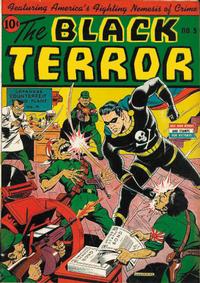 First Line of Dialogue or Text
Venturing into a war-torn Europe......
Genre
superhero
Characters
The Black Terror [Bob Benton]; Tim [Tim Roland]; Jean Starr; Colonel Danvers (of the British Secret Service, death); the Nazis [Geicke; rest un-named] (villains)
Synopsis
While in Switzerland, Bob accidently discovers a chemistry manuscript (signed by Marco Polo) telling the location of a strange chemical in Russian Turkistan......a chemical that explores with fifty times the force of dynamite. Bob and Tim head for this location before the Nazis discover it and use it for their own ends.
Keywords
Switzerland

First Line of Dialogue or Text
Give me a secret weapon and I'll conquer the world.....
Genre
superhero
Characters
The Black Terror [Bob Benton]; Tim [Tim Roland]; Jean Starr; un-named inventor (death); Herr Brock (villain); other Nazi agents [Otto; Hans; rest un-named] (villains)
Synopsis
While in Washington preparing for a mission, the Terror spots a man attempting to get into the White House to see the President about an invisible cloak he has invented. When he doesn't have any success, the man decides to sell his creation to the Nazis, which he does. But he's doubled crossed, and, before his death, the inventor places a curse on the cloak..
Keywords
The White House; Washington D.C.

First Line of Dialogue or Text
The Nazi spider spins its web.....
Genre
superhero
Characters
The Black Terror [Bob Benton]; Tim [Tim Roland]; Jean Starr; Professor Foray (leader of the French underground); Pierre (young boy adopted by Foray); Herr von Swineman (villain, death?); other un-named Nazis (villains, many die)
Synopsis
The Gestapo orders von Swineman to capture Professor Foray before the French underground can move against the Nazis. During a struggle with the arch villain, the Terror takes a pailful of double-strength ammonia into his eyes and falls out of a window to the ground. When he awakens, Tim discovers that his partner is suffering from amnesia!
Keywords
France; Free France (a newspaper); U-Boat

The Sheriff's Badge (Table of Contents: 5)

First Line of Dialogue or Text
Out of the southwest border country......
Genre
adventure; animal; historical
Characters
Thunderhoof (a black stallion); Stardust (a white stallion); Captain Gates (U.S. Cavalry soldier); Kenton (villain); Kelly (villain, Kenton's partner)
Synopsis
The U.S. Cavalry enters the town of Twin Peaks in search of horses to buy at $30 a head, and is told that there is a large herd in the area, but the leader of the herd, named Thunderhoof, would kill any man trying to get any of the horses.
Keywords
Fort Summit; San Morales Valley; Twin Peaks

Based on copyright dates, the Thunderhoof story in this issue was published between his appearances in AMERICA'S BEST COMICS #7 and AMERICA’S BIGGEST COMICS BOOK #1.