Panels or parts of panels from four interior stories. 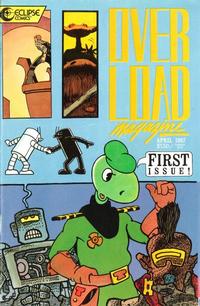 First Line of Dialogue or Text
The outer realms of reality are composed of an infinitely complex...
Characters
Aubrey Smith

Table of contents with row of small robots from "R Wars" across the bottom of the page.

First Line of Dialogue or Text
On the scorching planet of Terra 9 court rulings are decided...
Genre
science fiction
Synopsis
On a faraway world, alien beings accused of a crime must survive a 24-hour death run.

Signed "Dringenberg" in last panel. Credited to "Mike Dringenberg and Donald Chin" in the credits

First Line of Dialogue or Text
ARD, stabilize the gyro.

First Line of Dialogue or Text
Marvin's job was to check out space beacons.
Genre
science fiction
Characters
Marvin
Synopsis
Marvin is stranded on a planet when his spacecraft crashes. He has a wristwatch that tells him how to survive, but it proves to be more annoying than it's worth.
Keywords
spaceship; wristwatch

A Hairy Adventure (Table of Contents: 9)

First Line of Dialogue or Text
As our ship set down on the cold mountain's crown...
Genre
science fiction
Synopsis
A spaceship's crew is attacked by hairy seven-foot tall creatures, who take the lone survivor to their leaders, where he is asked a surprisingly mundane question.
Keywords
spaceship

Illustrated promo for "Contractors." . "Coming this June from Eclipse Comics."

First Line of Dialogue or Text
On a worthless world in a trivial part of the galaxy, they are busy...
Genre
science fiction
Synopsis
On a forgotten world, black robots are fighting white robots.
Keywords
robots

Attack of the Plastic Kiddy Playthings (Table of Contents: 13)

Story has no logo.

Inside back cover. A parody of a Sunday Doonesbury newspaper strip, drawn in the style of G. B. Trudeau. Credited to "CD Newdough" in the title panel, but also credited to Sam Wray on the contents page.

Enter the Mysterious World of Enchanter (Table of Contents: 16) (Expand) /