A composite cover, the Batman figure is by Mike Sekowsky and Bernard Sachs and from Justice League of America (DC, 1960 series) #37; the Sgt. Rock figure is probably by Joe Kubert; the Legion figures are by Curt Swan and Murphy Anderson from the cover of The Legion of Super-Heroes Archives (DC, 1991 series) #1; the art credits for the remaining JLA members are undetermined, and from a house ad announcing Johnny DC (circa late 1962). 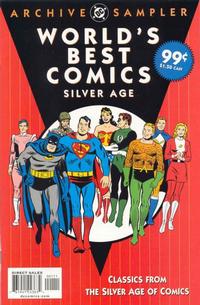 Doom of the Star Diamond! (Table of Contents: 2)

Pencils credited to Mike Sekowsky in error in item.

Doom of the Star Diamond! (Table of Contents: 3)

First Line of Dialogue or Text
Welcome to the Justice League, Green Arrow!
Genre
superhero
Characters
Justice League of America [The Flash [Barry Allen]; Aquaman [Arthur Curry]; The Batman [Bruce Wayne]; Martian Manhunter; Wonder Woman [Diana Prince]; Green Arrow [Ollie Queen]; Green Lantern [Hal Jordan]; Superman [Clark Kent]; Snapper Carr]; Carthan; Xandor
Synopsis
Dictator Xandor banishes Carthan to Earth, and, to ensure he stays there, also sends three machines. If Carthan attempts to leave Earth without removing their coverings, he will go blind; he can leave with his sight if he removes the coverings first, but that will destroy the planet. Carthan challenges the JLA, now including Green Arrow, to disable the machines. After disabling the machines, the JLA enters Carthan’s ship, where he imprisons them in a hollow diamond until he can explain. When Carthan is unable to release the JLA, Green Arrow finds the diamond’s weak spot and shatters it.
Reprints

The Legion of Super-Heroes! (Table of Contents: 5)

First Line of Dialogue or Text
I'm sorry, Superboy, but we cannot admit you into our super-hero club! Your low score on the tests we gave you proves your powers are too ordinary!
Genre
superhero
Characters
Superboy; Legion of Super-Heroes [Cosmic Boy; Lightning Boy; Saturn Girl]
Reprints

The Legion of Super-Heroes (Table of Contents: 6)

First Line of Dialogue or Text
My magnetic eyes will slow down that criminal getaway rocket! Knock out their ray-gun with a bolt, Lightning Boy!
Genre
superhero
Characters
Superboy [Clark Kent]; Legion of Super-Heroes [Cosmic Boy; Lightning Lad [as Lightning Boy]; Saturn Girl]; Pa Kent
Synopsis
Three teens from the future offer Superboy membership in their super-hero club. But when Superboy fails to complete three simple tasks, the Legionnaires pretend to reject him, until they reveal that the three tasks were merely intitiation pranks which proved he is a good sport.
Reprints